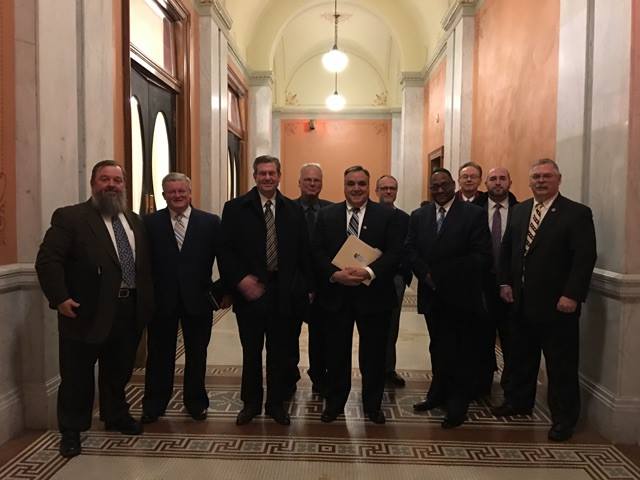 Good evening Chairman Bacon, Vice-Chair Dolan, Ranking Member Thomas, and Committee Members. My name is Alfred Davis. I am the pastor of the Bible Baptist Church in Richfield, Ohio, and a board member of the Ohio Christian Alliance. Thank you for the opportunity to give testimony in support of House Bill 36, the Ohio Pastor Protection Act.

I believe that the Ohio Pastor Protection Act is needed to help preserve and protect religious liberty in Ohio. When the United States Supreme Court issued it's now infamous ruling in the Obergefell case on June 26, 2015, the majority opinion decreed that same-sex marriage is protected by the 14th amendment and should not be discriminated against. The dissenting opinions disagreed strongly, declaring the majority opinion unconstitutional, a threat to religious liberties, and an abuse of judicial power.

"Five lawyers have closed the debate and enacted their own vision of marriages a matter of constitutional law. Stealing this issue from the people will for many cast a cloud over same-sex marriage, making a dramatic social change that much more difficult to accept."

"Today's decree says that my Ruler, and the Ruler of 320 million Americans coast-to-coast, is a majority of the nine lawyers on the Supreme Court."

"The Court's decision today is at odds not only with the Constitution, but with the principles upon which our Nation was built. Since well before 1787, liberty has been understood as freedom from government action, not entitlement to government benefits."

"Today's decision shows that decades of attempts to restrain this Court's abuse of its authority have failed. A lesson that some will take from today's decision is that preaching about the proper method of interpreting the Constitution or the virtues of judicial self-restraint and humility cannot compete with the temptation to achieve what is viewed as a noble end by any practicable means."

Donald B. Verrilli, Jr., then the Solicitor General of the United States, responded:

"The phrases "religious liberty" and "religious freedom" will stand for nothing except hypocrisy so long as they remain code words for discrimination, intolerance, racism, sexism, homophobia, Islamophobia, Christian supremacy or any form of intolerance. Religious liberty was never intended to give one religion dominion over other religions, or a veto power over the civil rights and civil liberties of others…This generation of Americans must stand up and speak out to ensure that religion never again be twisted to deny others the full promise of America."

This is troubling to me as a pastor who strongly believes, based on my deeply and sincerely held religious beliefs and convictions, that marriage is between a man and a woman and, consequently, could under no circumstances perform, celebrate, or otherwise solemnize a same-sex marriage. It is troubling because Chairman Castro's statement follows the Findings and Recommendations section of the report that finds:

"In Obergefell v. Hodges…the U.S. Supreme Court recognized that the Fourteenth Amendment grants the civil liberty of full marriage equality to same-sex couples throughout the nation. Prior to this ruling, during the Commission's briefing, panelist and University of California Davis Law School professor Alan Brownstein referred to governmental recognition of marriage equality as a "moral necessity"…Religious exemptions to the protections of civil rights based upon classifications such as race, color, national origin, sex, disability status, sexual orientation, and gender identity, when they are permissible, significantly infringe upon these civil rights."

Also, later in the same report, Chairman Castro, along with Commissioners Achtenberg, Kladney, and Yaki state:

"Threats to civil liberties, cloaked as "religious freedom" protection bills, are emerging in dozens of states and localities across the nation… By early 2016, approximately two dozen state legislatures were considering at least that many bills which aim to limit Americans' access to marriage rights, other government services, commercial services, health care services, adoption and foster care services, and other aspects of daily life based upon "religious exemption."…The extent to which these proposals represent a backlash to the U.S. Supreme Court's June 2015 recognition of a right to marriage equality for same-sex couples and President Obama's Executive Order which prohibits federal contractors from discriminating upon the basis of gender identity or sexual orientation is quite clear. Most are thinly-veiled attempts to turn back the clock, and will fall to constitutional challenge as overbroad and motivated by animus."

It seems to me, therefore, that there exists a clear and present danger to pastors, ministers, churches, and religious organizations who refuse to perform same-sex marriages or allow their facilities to be used for the celebration of the same. When government officials as diverse as U.S. Supreme Court justices, the U.S. Solicitor General, and U.S. Commission on Civil Rights officials suggest that government decrees trump religious liberties, state and local governments will be pressured by activist groups to enact laws and regulations to not only eradicate public opposition to same-sex marriage, but to also punish such opposition. Such laws and regulations would have a detrimental effect on not only freedom of religion, but freedom of speech, press, assembly, and the right to petition the government for redress of grievances because those freedoms are all supporting clauses in the single sentence of the First Amendment supporting freedom of religion.

Now, while it is true that both the United States Constitution and the Ohio Constitution provide strong protection of our religious freedoms, they do not provide protection against frivolous, malicious, and harassing lawsuits as a means of harassing pastors, ministers, churches, and religious organizations who refuse to perform same-sex marriages or allow their facilities to be used for the celebration of the same. Lawsuits, which, though they may ultimately fail, can damage, bankrupt, and do irreparable harm to pastors, ministers, churches, and religious organizations through excessive legal fees, denigration of character, and overwhelming public opposition. In fact, the financial, emotional, and reputational cost of defending against such lawsuits may be enough to cause some to roll over, settle out of court, or otherwise give in and capitulate to the demands of the activists filing such lawsuits.

Much of this danger can be avoided by the passage of House Bill 36, the Ohio Pastor Protection Act, which will serve a security fence around Ohio's pastors, ministers, churches, and religious organizations. HB 36 will protect and secure the free and full expression of our First Amendment rights by exempting pastors, ministers, churches, and religious societies from civil or criminal liabilities (i.e. lawsuits) for refusal to solemnize same-sex marriages or to allow their facilities to be used for such marriages. In doing so, HB 36 is in direct accord with the Ohio Constitution, which states explicitly in Article 1, Section 7:

"Religion, morality, and knowledge, however, being essential to good government, it shall be the duty of the general assembly to pass suitable laws to protect every religious denomination in the peaceable enjoyment of its own mode of public worship, and to encourage schools and the means of instruction."

Consequently, according to the Ohio Constitution, it is the duty of the Ohio Senate to pass laws, such as HB 36, to protect Ohio's pastors, ministers, churches, and religious societies from the threat of lawsuits meant to harass, harm, and otherwise restrict or limit the peaceable enjoyment of their sincerely held religious liberties and practices. Therefore, I respectfully urge the Members of the Ohio Senate Judiciary Committee to fulfill their duty under Article 1, Section 7, of the Ohio Constitution and pass House Bill 36, the Ohio Pastor Protection Act, as expeditiously as possible.

Thank you for your time. I am happy to answer any questions from the Committee.